Guest Post by Rakesh: Here are 5 iPhone apps (they are available on Android also) which I can’t do without daily. There are a lot of top quality and popular apps out there for your smartphones, but at the end of the day for most users like me it boils down to few apps which I use daily no matter where I am until the battery dies out. Here are my top 5…

Are you getting calls from unknown number ?? Do you want to avoid calls from unknown marketing companies? Well , then you have a revolutionary application here which will help you do exactly the same. True Caller recognizes the call from an unknown source and displays the name and other information available about the number.

The interesting part is you do not have to have the number in your contacts all you need is internet access and you will have the persons number . Pretty amazing eh ? But the downside is that it saves your contacts to a central server, which is used as a dynamic directory. Which app doesn’t do that nowadays, anyways? 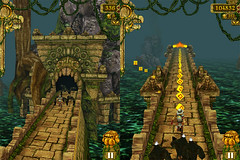 Ever since Imangi Studios launched the endless running play Temple run iOS and automaton, it created certain that we have a tendency to never stopped running. The app has four different version with the sequel (Temple Run 2) launching in January this year.

With just few days into the market the game broke record of Angry Birds (50 million downloads in 13 days). In the new OZ version of temple run , you are no longer chased by monkeys , it’s the balloons that keeps chasing you while you are running away. So Run Forest Runnnnnn……

Angry Birds, one of the most favored game that started it all for Rovio, is now on the market at no cost on iPhone and iPad. this can be the primary time that the first game is being offered at no cost since the launch of the game in 2009. Moreover, this app has conjointly got an update that more fifteen new unhealthy Piggies levels for gamers to master.

Google Maps is Back

After creating a disappointing failure of Apple Maps, Google Maps has finally arrived for iPhone and its fabulous. One of the major problem with Apple maps is the underlying data connected to the app.

Though Google and Apple worked on creating a complex database , each of them get satellite feed and other data from companies . But the problem is , the world is never constant . So the data is never absolutely correct . But Google has perfected its Maps over the years , many Google workers have spent years hand-editing the maps, fixing thousands of errors that folks report on a daily basis. In the new app you can report a bug by simply shaking the phone. And since 2006, Google’s Street read vehicles have trawled 3,000 cities, photographing and confirming the fashioning accuracy of 5 million miles of roads.

But Google maps lacks Siri integration , When you talk to Siri for directions, apple maps opens up automatically. This could be the only black mark on Googles point of view. Finally, though Google Maps runs fine on the iPad, it’s simply a blown-up version of the iPhone version. there is not however not yet an iPad-specific app.